Dog aggression stems from a dog’s innate desire to control space and dominance. Aggression is the most common and serious behavior problem in dogs. In most dogs, aggression gradually gets worse. If the handler doesn’t have means to stop this behavior, it does increase. It’s important to be able to read the signs. Aggression can be reinforced on accident by the pet owner often trying to calm or comfort their dog, but if done at the wrong time, it reinforces the dog’s weak state of mind.

Getting a dog too soon is bad. If a canine is pulled from its mother during whelping, it can result in dog aggression. Lack of socialization can also be the start of less than satisfactory social skills and insecurity when meeting new dogs and can result in aggressive-type behaviors.

Not all dog aggression will lead to a horrific bite, but that can be the end result if the dog is not stopped from hostile brain processing. A dog biting doesn’t just happen; there will be signs showing its insecurity to warn you ahead of time. If humans and other dogs don’t pick up on the cues, the dog will satisfy the need to up the ante in its attempt to communicate its discomfort in the current situation.

With an understanding of the importance of identifying signals, negative outcomes from aggressive behavior can be avoided. Here are a few of the most frequent signs:

Muzzle punch: I’m not talking about accidental contact, rather a harsh muzzle shove/poke with a purpose. This is a rude push with the dog challenging and trying to control you or another dog. Depending on the dog, I would consider repeating whatever one was doing just before the muzzle punch occurred, gradually looking for the dog to lessen its undesired behavior through reward. The reason to recreate the event is so you can desensitize the canine to the triggering event.

Growl, usually paired with a lip curl: One of the easy cues to pick up on is canine growling. The dog is using its language to say, “Stop what you are doing.” Likely, the dog is feeling its personal bubble being invaded or is protecting a resource. The resource could be a possession, such as food, toys, or in extreme cases, a person. It’s important not to pressure a stressed dog too much; however, not working through it will never make the behavior go away. If the pet learns it can get people or dogs to back off by growling and curling the lip, it will continue to do it.

Lip curl- The Daschund is lip curling because it didn’t like the approach from the other dog. The dachshund being on leash doesn’t help the situation because it is so tight, watch how the owner is holding the leash. Remember also, that everything runs down leash.

Showing teeth: Some dogs show teeth before growling, while others will curl the lip, show teeth and growl. You may also observe that the eyes are wide and dilated. This is a dog trying to avoid conflict by warning, so be sure to honor that in some way, i.e. consider the environment and confirm if the dog’s reaction is valid.

Snarl: This is a growl paired with baring teeth, which is saying that things are beginning to get more serious. The dog is triggered here for sure and is likely willing to bite, moving forward. You must take note what caused the dog to react this way and train the issue. Essentially, change the dog’s frame of mind. If the dog is protecting its food and doesn’t want anyone coming close, change the dogs thinking to expect that when you come close, you are going to add something of higher value to the food bowl. 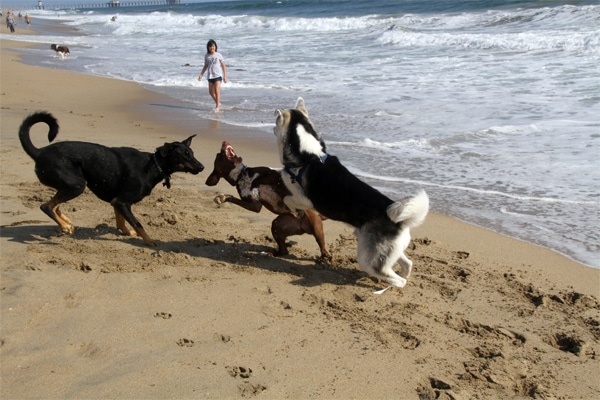 Snarl- This is what a snarl can look like when dogs are playing. This play is borderline too rough. Look at the dog on the far left, he looks concerned, it is showing caution. 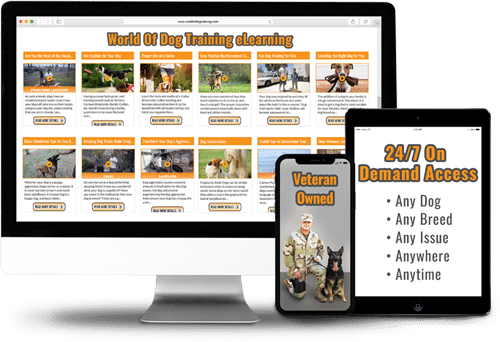